A holistic rural community development model seeking to bridge the gap between the urban and rural communities via 10 empowerment divisions across 500+ villages island-wide reaching over 35,000 beneficiaries annually, free of cost. 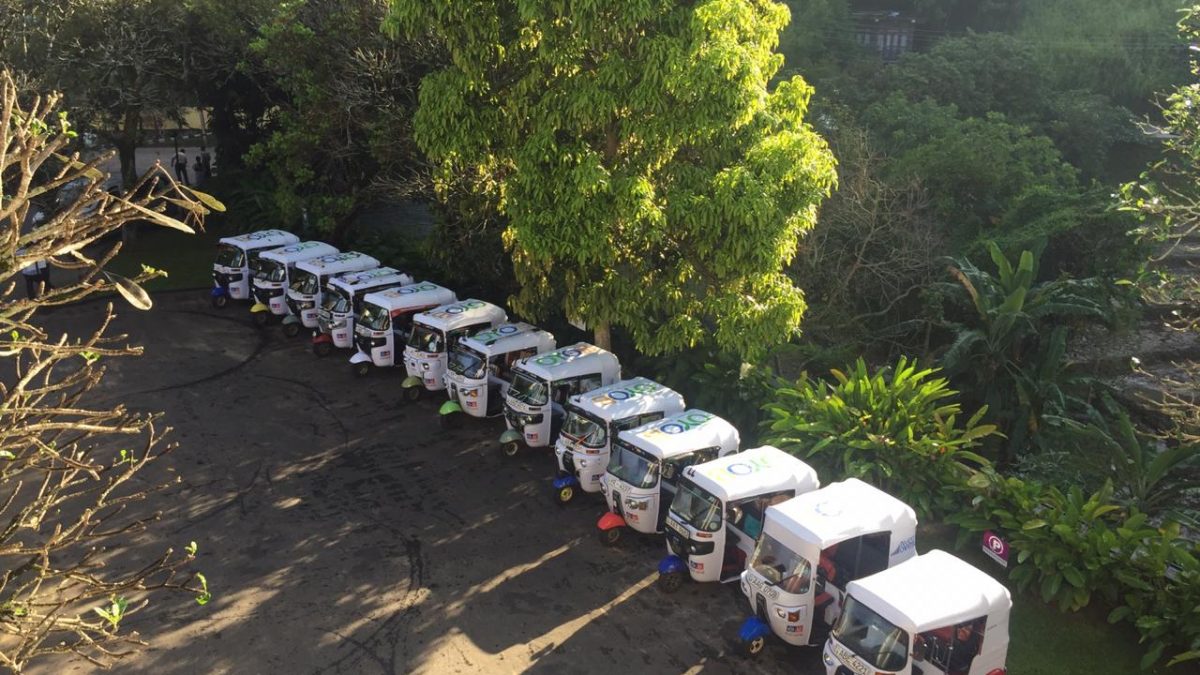 It is a rare but wonderful thing which must be celebrated, when a collective of like-minded individuals can come together for the greater good of others, notwithstanding barriers of language, geography and nationhood to uplift humanity. It was just such a group of 28 exceptional individuals who made up the 2019 OYOB Tuk Tuk Ride, which took place from the 1st – 8th October, travelling from Chilaw to Hikkaduwa via Anuradhapura, Habarana, Kandy and Udawalawa. 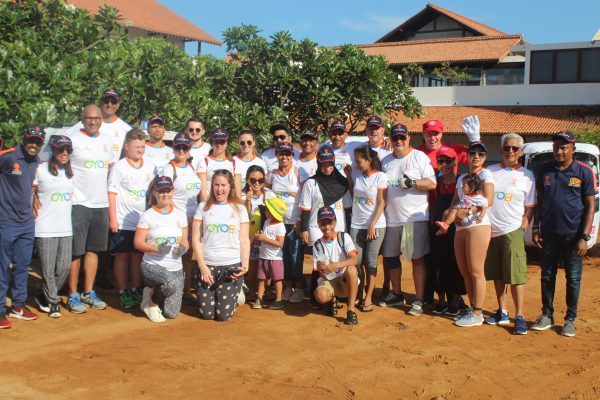 Travelling from Australia on the 29th of September, the group went directly to Chilaw where they were greeted bright and early on the 30th morning by team FoG and our trusty service partners, the crew from the David Pieris Motor Company who would not only be shadowing us the entire length of the ride attending to breakdowns, repairs and other urgent needs but also conducting a very thorough training session for all of our riders before they took on the Sri Lankan roads. 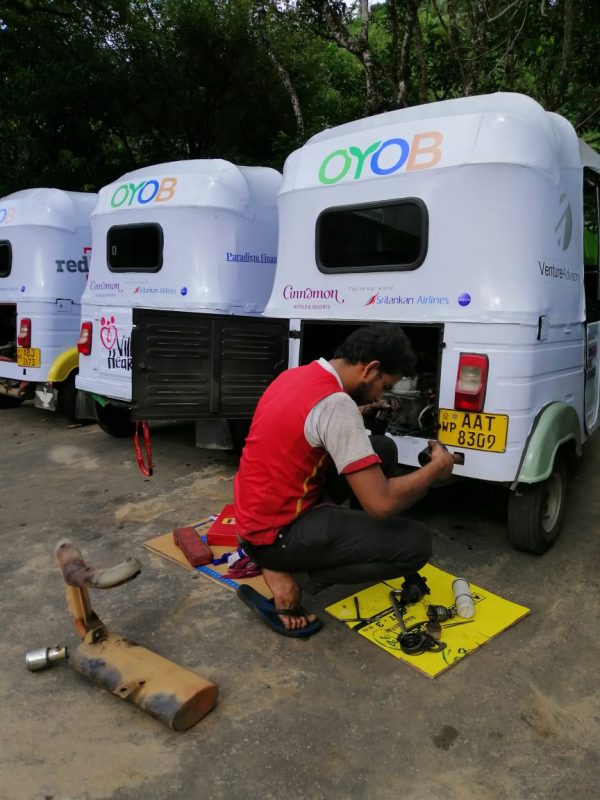 A quick team meeting helped everyone articulate their motivations for joining the ride and illustrated the truly special bonds and relationships between the riders ranging from OYOB Property Group staff members, partners and clients to family members and friends. Some group members had brought their parents while others had brought their children including our youngest participant, little Kiana, who was not even a year old, but was returning for the second time, having been in her mum’s tum while she rode her tuk  tuk last year.

The 1st of October dawned bright and sunny and after their practice session the day before, our team was rearing to go! The first day of riding would cover the staggering 230 kilometers from Chilaw to Habarana including a pit-stop in Anuradhapura to visit the Mahawilachchiya VHE Centre which the ride was raising funds for. From Habarana the group rode on to Kandy, and from there they headed to Udawalawa via Ella before concluding the ride in Hikkaduwa. 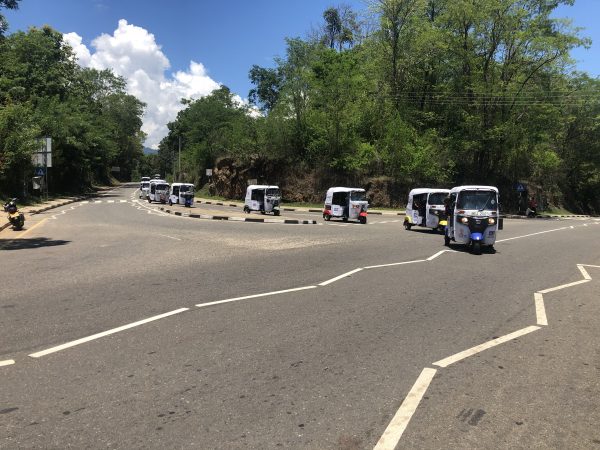 While the first ever OYOB tuk tuk ride which took place last year was an easy drive for the most part along long straight stretches of road with little traffic, this year’s route was one that challenged the riders every step of the way both mentally and physically.

Long days navigating winding roads, aggressive traffic, climbs and descents across mountain ranges, road constructions, traversing the dark and rainy nights, forced the group to push through and conquer their fears and doubts along the way. 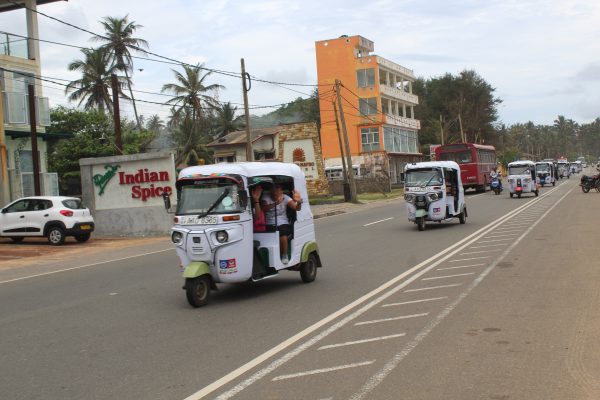 Even on the toughest stretch, the breathtaking beauty of the scenery could not be denied as the team drove through thick forests and misty mountains, down to the final leg of the ride which took them past sunny coastlines and picturesque fishing communities.

The group also made time for special cultural stops including a visit to Sigiriya, the ancient rock fortress which has been declared a UNESCO World Heritage site where they were able to learn more about Sri Lanka’s history while taking in the amazing views from the top and the Temple of the Tooth in Kandy, a greatly venerated site in Sri Lanka where a tooth relic of Gouthama Buddha is enshrined. In Udawalawa early morning safaris revealed a plethora of tropical flora and fauna including elephants, water buffalo and peacocks and for those who were not early risers, a visit to the Elephant Transit Home gave them a chance to see dozens of baby elephants receive their mid-day feed. 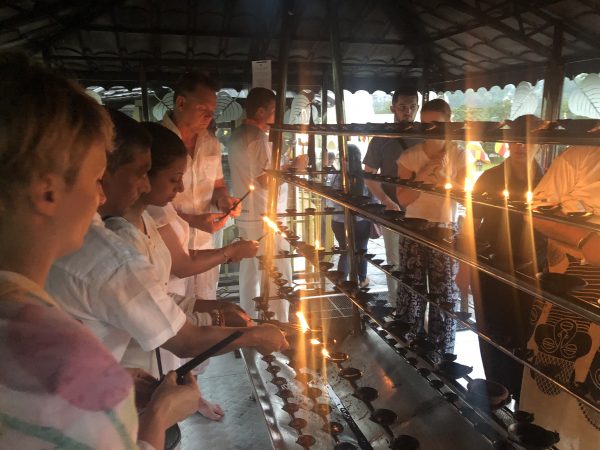 But the heart of the ride always lay in the special programmes planned along the way to visit FoG’s Village Heartbeat Empowerment Centres in Anuradhapura, Batticaloa and Moneragala as well as a Reverse Osmosis Water Purification Plant in Anuradhapura.

The first stop was in Anuradhapura where the Foundation of Goodness had recently partnered with Mrs. Lovina Charles and taken over the facilitation of the Charles Education Centre to expand our Village Heartbeat Empowerment Centre concept to the Anuradhapura district. All the little ones were gathered in their best outfits to welcome the riders with flowers while a marching band led the way to a small gathering which was followed by lunch and a performance by the kids who were quickly joined by the riders as they danced. 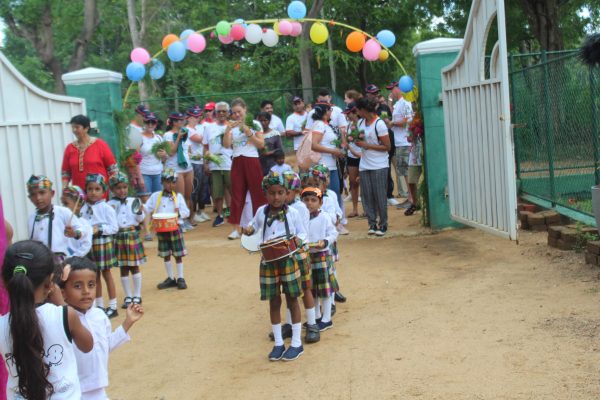 “Some of the girls I was speaking to said she finishes school and travels for an hour over 10 km by bus to come to these computer classes. They are all very keen to learn and they want to do well in the future.” said Ganga Fernando one of our tuk tuk riders. 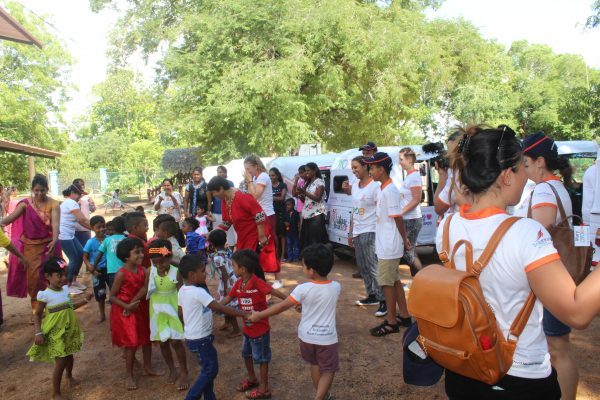 While in Anuradhapura the riders also visited the Mihintale Reverse Osmosis Water Purification Plant established by the PMTT Charity Tuk Tuk Ride which was the inspiration for this ride.

Over 500 people receive clean water from this plant every month, a great relief for a rural community who live with the constant threat of Chronic Kidney Disease due to the severely contaminated water sources in their region. 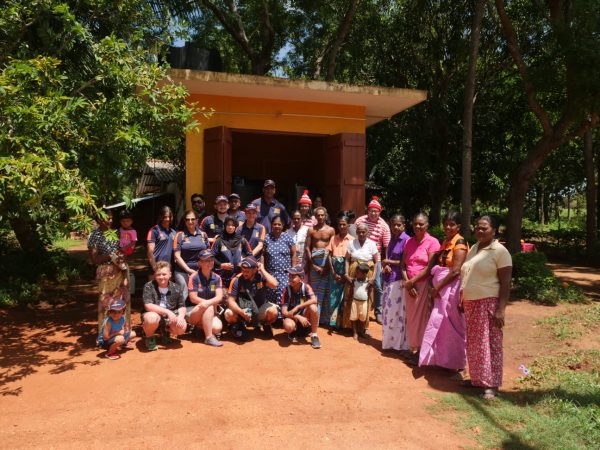 “Up until today everything was all about the kids for me, and giving kids an opportunity, but when you realized that if you guys don’t do what you do in these areas people are actually dying. It changes the perception of what we’re actually doing. It’s more than just opportunity, it’s giving people life. The most important thing that I’m really proud of is that 20 something Aussies care about people.” said rider Michael Mamasis.

Referring to the urgent need within these communities, rider Aman Sharma added, “In every other charity that I’ve supported people have the option to do something and get out of that situation, here they don’t.”

A few of the group members also had the opportunity to visit the Batticaloa and Moneragala VHE Centres where they were greeted by excited kids and eager students who attended the programmes at the Centres. Some of the ladies who attended the Women’s Empowerment vocational courses had even brought along items they had learned to make and were incredibly proud to show off to the visitors. 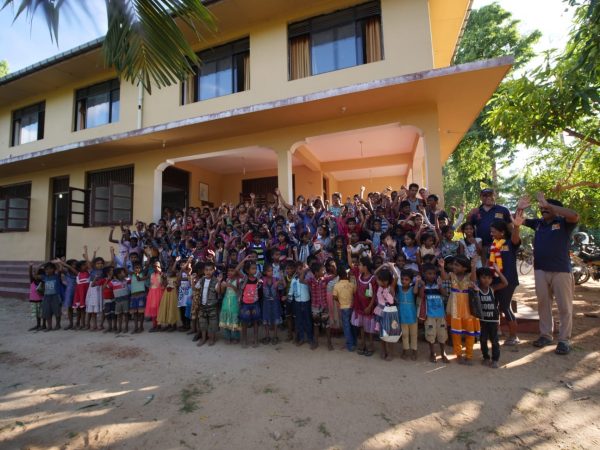 “At the Moneragala VHE Centre it was great because the kids actually remembered me from last year and I remembered them. It was again so many smiling faces eager to please and the women were amazing, they were so proud of everything that they had made. It was incredible, what they had  made was incredible covers, stuffed animals, bags, clothes… then we went in to see the computer room and the kids with their robotic projects; of which they were so proud. They had a banquet ready for us and here they were beaming.” said a delighted rider Mary Ignatidis.

“All the kids that I’ve met and their smiles really connected with me. When you look at these kids you can really see the potential and what they can become and who they are, being born here I know sometimes the circumstances of your birth can limit you and coming out of that is a massive struggle. So I was really impressed when I went to Moneragala and they spoke English really well and I didn’t think they would have IT training in such rural areas either, so seeing it firsthand has really had an impact, for me and I keep thinking what if we can do more to reach even more children?” said rider Rajeeva Jayasinghe 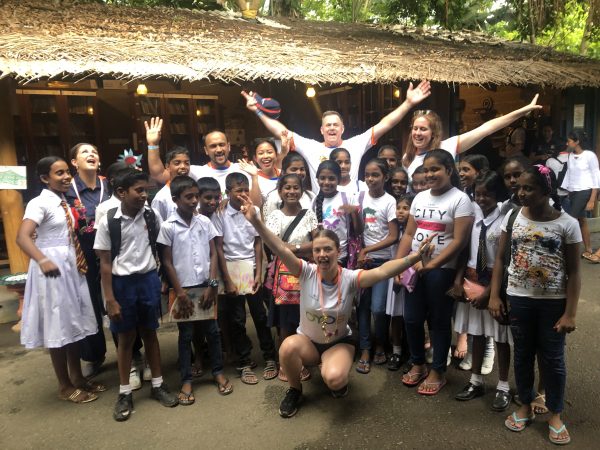 The culminating stop for the ride was Seenigama. The last real leg of the ride brought us to Hikkaduwa and after making themselves at home at the Hikka Tranz Hotel by Cinnamon, the riders got back in to their tuks for the very last time and rode down to FoG’s home base: the MCC Centre of Excellence, where none other than our beloved trustee and cricketing legend Kumar Sangakkara who has just taken office as the first non-British President of the Marylebone Cricket Club had arrived to welcome them with open arms. 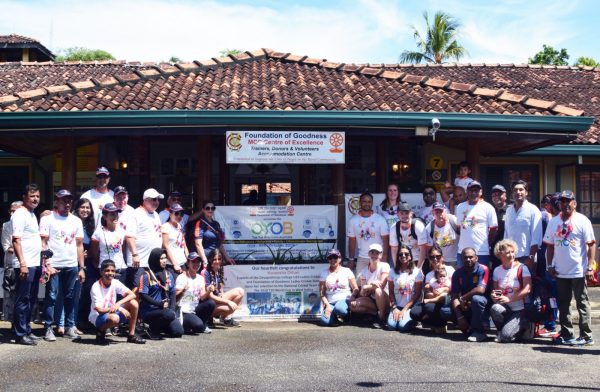 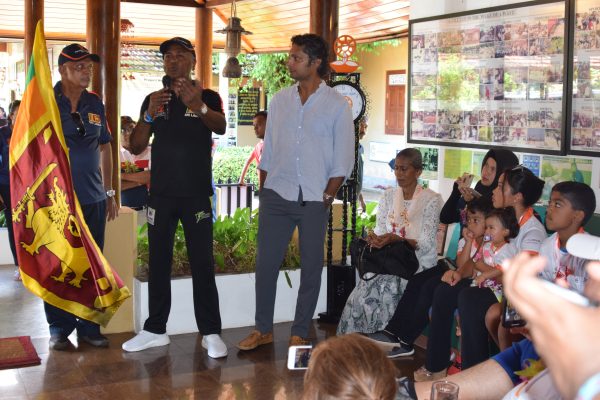 After vising all the programmes in action and playing a bit of cricket at the Sports Academy the Aussies spent some time helping our students practice their English skills and soon, a rousing game of hangman was underway among the younger students amid much cheering and laughter while Aynkaran Sivaratnam with the assistance of Rajeeva Jayasinghe conducted two personal development workshops for older students.

As the drive drew to a close with a special team dinner that night, the group were committed to their role of creating change in the world and giving hope to more and more people to improve their lives. 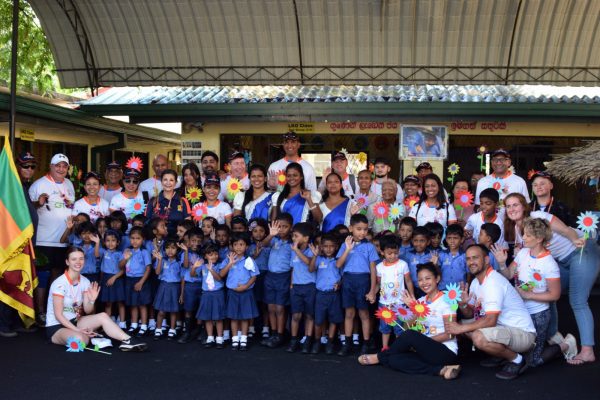 “The Foundation of Goodness is a perfect example of how to look after people in rural areas. They do extraordinary work with such dedication and care to improve the lives of the people in so many ways by giving them learning opportunities, training, medical care, dental care, purified water and much more.” said rider Bertram Daniel

“I have firsthand seen the incredible work the Foundation of Goodness does for the ones who need it the most! Our company is committed to help the foundation to grow their reach even wider and deliver their blessings even stronger! We have had the privilege to spend almost two weeks visiting the centers with our 2019 TukTuk ride challenge where we have raised six figures to help maintain and add more village heartbeat centres. The world is definitely a better place due to the huge impact you are making!!! I am truly blessed to be a part of it and support as many people in need as we can!” – said rider Amalia Vincze 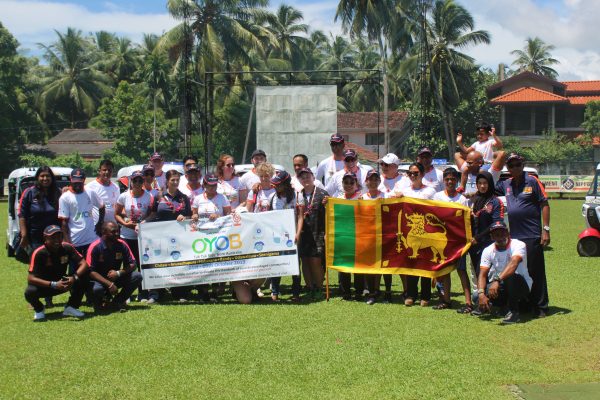 A big thank you goes out to the OYOB Property Group Australia for spearheading the tuk tuk ride for the second year running, the proceeds of which will go towards supporting our Mahawilachchiya (Anuradhapura District), Batticaloa and Moneragala Village Heartbeat Empowerment Centres. We would not have been able to make this ride a success without our Sponsors Cinnamon Hotels and Sri Lankan Airlines and our Service Partner, David Pieris Motor Company (DPMC). 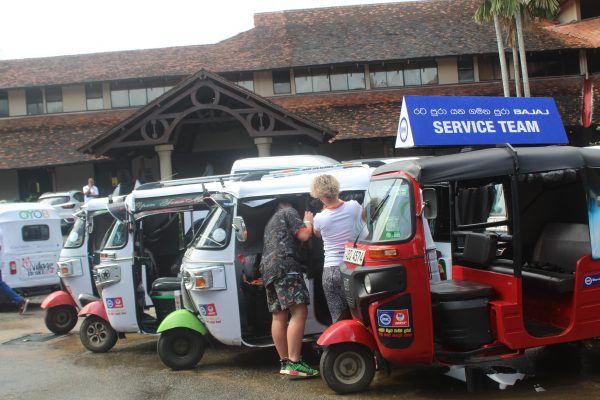 Our heartfelt appreciation also goes out to all of the Tuk Tuk sponsors who helped us raise the funds which will make a real and lasting impact in the lives of over 1,800 beneficiaries attending various classes and programmes at the above mentioned VHE Centres 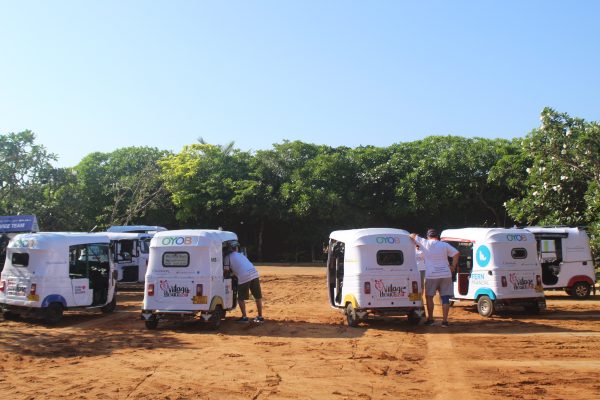 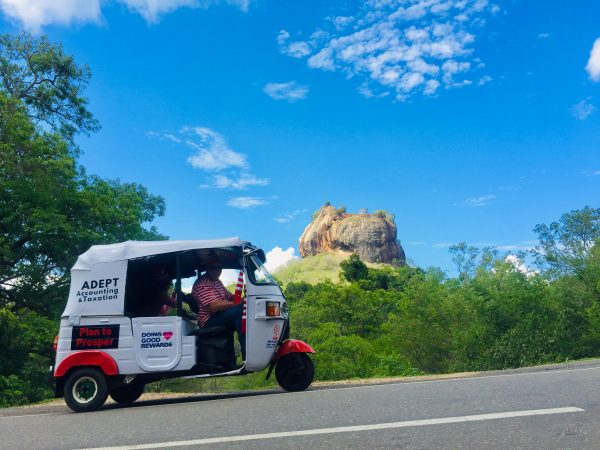 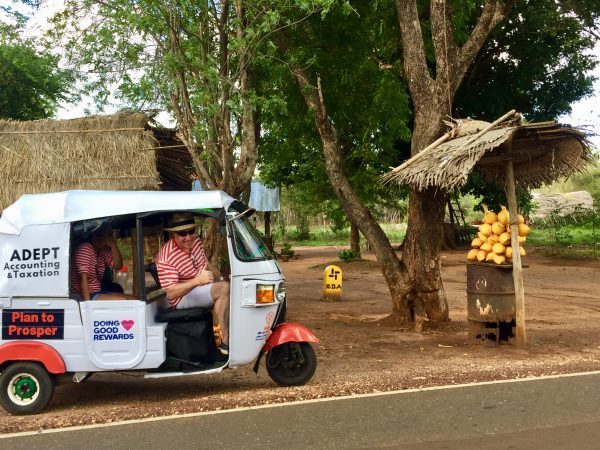 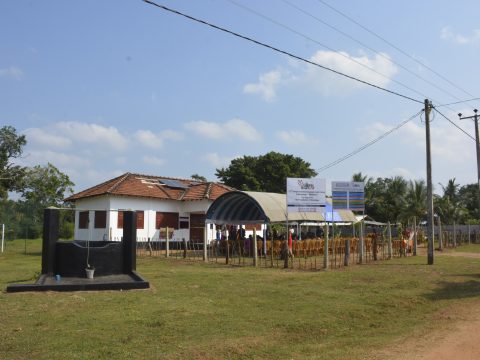 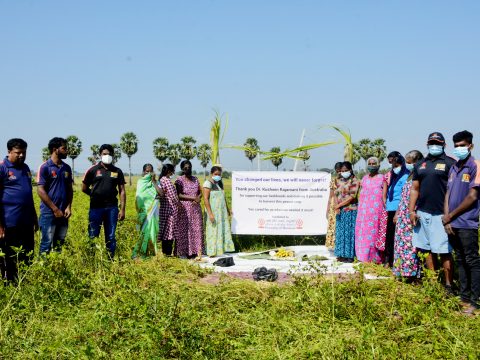 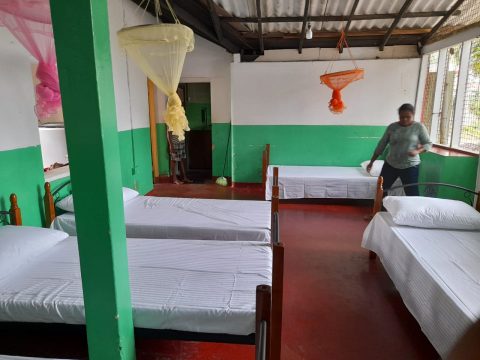