Tides of Peace, Bridging the North and the South: Visit of the Manipay Local Council 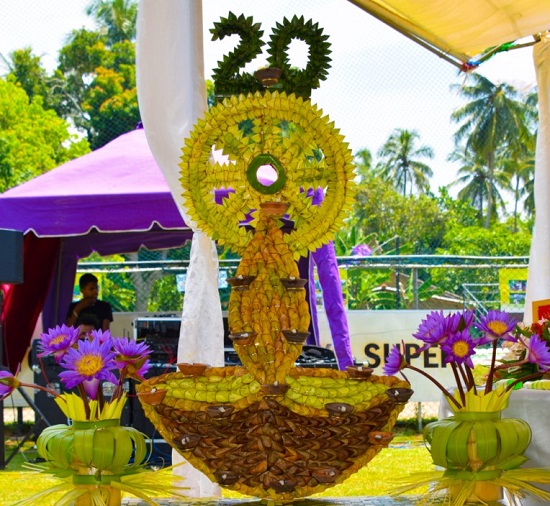 The Foundation of Goodness celebrates 20 years of humanitarian service in 2019 and a special press conference took place on 12th March 2019 at the project headquarters and flagship model- The MCC Centre of Excellence and Sports Academy in Seenigama.

Established in 1999, The Foundation of Goodness (FoG) has worked extensively to develop a one-of-a-kind, holistic, rural community development model which today delivers a wide range of programmes through the MCC Centre of Excellence and Sports Academy in Seenigama, as well as 10 Village Heartbeat Empowerment Centres located island-wide. 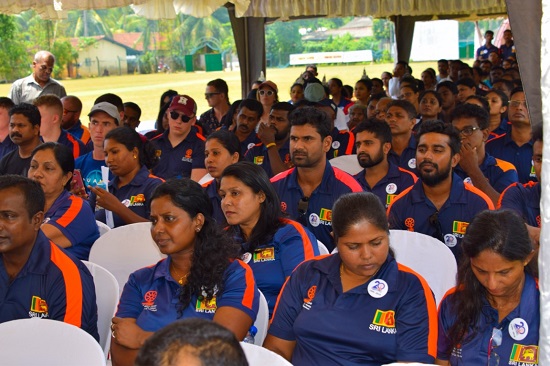 The Foundation of Goodness has continued to expand and grow both in terms of its reach and the breadth of its programmes and will be kicking off a range of new projects in its 20th year.

The Foundation of Goodness illuminates the lives of rural under-served villagers, invigorating them to overcome challenges and build self-reliant and resilient lives as it continues to fortify one life at a time to build a promising tomorrow for the humanity. 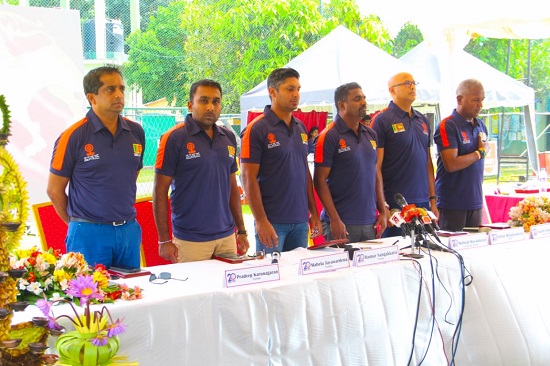 “It is so important to empower the rural disadvantaged communities unless we harness their potential Sri Lanka can never be prosperous to the extent that we aspire it to be.”

Kushil Gunasekera – Founder/ Chief Trustee of the Foundation of Goodness

“I am very passionate about uplifting rural educational standards and sports facilities, which we do the best through the foundation of Goodness.”

“FoG has built an unblemished track record and reputation on undertaking truly transformational projects. The fact that they have been so transparent in the way they work with donors certainly makes donors feel that their money has gone to people in need.”

“Its about building lives and making sure the families and communities keep progressing in society and in life, and that the most important thing that the Foundation achieves.”

“Sports gives you a lot of life lessons, through sports you can cultivate good values and discipline and make them better people.”

“FOG today Focuses all over the country, not just the post tsunami or post war regions, through range of new initiatives such as Village Heartbeat Centers and Sustainable income generation programs.  It’s a great Honour and privilege for me to be able to contribute for the same”

“Empowering people is not an easy task, making people realise there is hope in life is tougher. I would also like to thank everyone directly or indirectly involved in any way in giving hope and making thousands of dreams come true. Thanks for caring.”

“The Foundation of Goodness is constantly expanding it’s work and it has been a pleasure to lead an assistance programme to local NGOs caring for the special needs children in the North and South.”

“Residing in the USA, it is a privilege to be able to give back to my nation and I am blessed to be able to make the smallest change in the life of a few people and families in need.  My goal is to continue this work for the rest of my lifetime.” 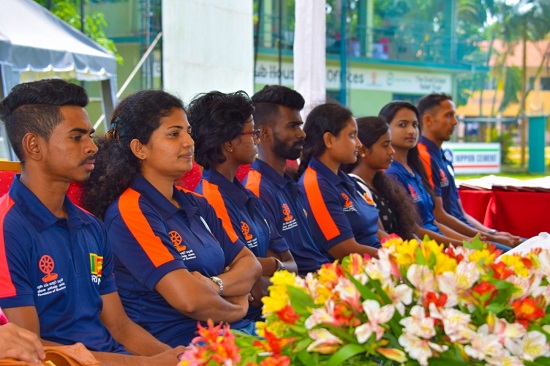 Beneficiaries at the Head Table

Kalani Madushika is 25 years old and the owner of her own Beauty Salon. It is not always common for girls in Kalani’s village Batapola to become entrepreneurs, but with the training, she received free of charge from the Beauty Culture Course at the Foundation of Goodness, Kalani had laid the groundwork for a rewarding career. Today she is able to not only support herself and her family but provide other young women in her village with employment.

25 year old, Suthanantharasa Eliliny has an occupation considered unusual for women in her village of Oddusuddan, in the North of Sri Lanka. Eliliny is a CCTV Technician, one of the very few in the area and handles the installation and repair work for her customers in the region. Her work requires her to travel far and wide across the Mullaitivu District, empowering her to be the breadwinner for her family. The only child of a farmer, Eliliny did not hesitate to shoulder the responsibility of caring for her parents when the war left them impoverished. Her family’s economic strains had effectively stopped her from pursuing her higher education, but when Eliliny heard of the FoG CCTV Course, that was provided free of charge, she jumped at the chance to learn a skill that will enable her to earn an income. Following her graduation from the FoG Eliliny has been able to provide for her family and works hard to take her CCTV business forward.

28-year-old Menaka Sandamali was handpicked by the John Keels Group to join their team as an Accounts Assistant when her skill and diligence was spotted by their management while she was the Team Leader at our Seenigama Business Process Outsourcing team. Menaka joined our IT class in 2010 and graduated top of her class, after which she was absorbed into the BPO team. At present, with a job at one of the most prestigious conglomerates in the country, Menaka’s prospects have completely changed. ‘A student who walked into Foundation of Goodness without having touched a computer, today I have gained a lot of knowledge and work experience. I have also been given the responsibility of a Director and a shareholder of the Seenigama BPO’ says Menaka reflecting on all that she has achieved.

The son of an artist from Akurala, a rural village in the South of Sri Lanka, a few years ago Tharaka’s dream to design houses was just that, a dream. Today 29-year-old Tharaka Subash De Silva is a graduate of the City School of Architecture armed with a B. Sc (Hons) Architecture Degree from the University of West England. All this has been possible due to Tharaka’s discipline, dedication and hard work and FoG is proud to have assisted him in rising beyond life’s circumstances and achieving his dreams. FoG provides deserving university students with scholarships that affords them a monthly allowance, for stationary and transportation.  Having passed the competitive entrance exam to CSA, Tharaka’s requirement surpassed our regular allocation. Never one to discourage a deserving beneficiary, FoG Founder and Chief Trustee Kushil Gunesekera, got in touch with one of FoGs long term supporters Dr Naj Nagendran. Dr Nage came on board to sponsor Tharaka’s higher studies to become a Chartered Architect.

The Sri Lankan Deaf Cricket Team made history when they won the ICC Deaf T20 World Cup (DICC) in 2018. Captaining this historic team was none other than our very own Gimadu L Malkam. Captain Malkam led by example with an outstanding overall performance scoring 41 from 41 and taking 3 for 25 in 3.5 overs. Malkam was named the Man of the Final and Man of the Series. He was also the highest scorer of the tournament with 332 runs in seven matches while taking 11 wickets with his leg spin bowling. ‘The challenge for me was to bring the trophy home to Sri Lanka, so I played my best game’ said Malkam speaking of his experience at the World Cup. Malkam and 3 other players on the Sri Lanka Deaf Cricket Team continue to train at the Seenigama Sports Academy. They were able to benefit from the resources made available at our Sports Academy while participating in the many coaching clinics organised by the Foundation.

Foundation of Goodness’ Triathlete Lakruwan Wijesiri is the first and only Sri Lankan triathlete to participate in the Asian Games, to date. Lakruwan has been competing in triathlons locally since 2011 winning the Loving Trinco Triathlon in 2011 and 2012 as well as the Carlton Super Cross in 2013 and 2014. He started his international career as a professional triathlete in 2013 by participating in the Cold Storage Triathlon in Singapore and also participated in the Ironman 70.3 Triathlon in Indonesia in 2015, obtaining 4th place at both events. At this time, Lakruwan had no formal training as a triathlete and had only ever practised at the FoG Bryan Adams Foundation Swimming Pool Complex while running and cycling down village roads. Following his performance, at the Singaporean triathlon, the Foundation of Goodness was able to connect Lakruwan with sponsor Mr. Mohan Chandramohan from USA who supported his training at MetaSport- Singapore. He was also given the backing, training and development by the Sri Lankan Navy to raise the bar in reaching this milestone. 29-year-old Lakruwan is currently a Swimming Coach at the Foundation of Goodness Sports Academy and hopes to expand his triathlon dreams to one day represent Sri Lanka at the Olympic Games

Jayani Wasundara was a student of the FoG Bakery Course who utilized the knowledge and experience she gained from this class to lay the foundation for her future in the food industry. Using this as a launch pad for her career Wasundara was able to secure a position as the Assistant Pastry Chef at the prestigious Shangri-La Hotel in both Colombo. Hailing from a village in the South of Sri Lanka, Wasundara’s hard work shone through when she was able to top her batch at FoG. In a highly competitive job market, this achievement went a long way in giving her the edge she needed to gain entry into one of the world’s most luxurious hotel chains.

Kaveesha Dilhari was the youngest ever player to be selected into the National Ladies Cricket Team. At 17 she first represented Sri Lanka in a home tournament against Pakistan and has been a permanent fixture in the national team ever since. This teenage all-rounder was described by Sri Lanka’s high-performance manager Simon Willis as a “very competitive beast.” and had been identified as an extremely talented cricketer to be groomed for the international stage. Kaveesha’s natural skill was identified when she joined the FoG Sports Academy at age 13, having gained training and exposure through FoG she has been playing domestic Cricket since 15 and the 18-year-old is now a familiar face in the National Squad.